Last weekend, we traveled Chicago, Illinois, to experience the culinary genius and creativity from Chef Grant Achtaz. Invited by some friends who had a reservation, we were so excited to get to experience Achtaz’s surprising culinary style at Alinea.

We had first discovered Alinea through a documentary series. Over the summer, we were hooked on the Nexflix series “Chef’s Table.”  The series interviews and exposes some of the world’s greatest chefs. Most, like Alinea, are Michelin rated, but the documentary series focuses on their background, culinary history and their culinary specialties that keep their reservations booked out for months.

Alinea was featured in the series for many reasons, but if I were to guess, Alinea and Chef Grant Achtaz were featured because of his culinary mission to surprise your senses and allow you to experience and enjoy food in a way you never have before. Our experience at Alinea pushed our senses to a whole new level, encouraging us to indulge in food with more than our tastebuds.

After their recent complete remodel of the restaruant and menu, we had no clue what to expect going into the evening. Walking into the restaruant, we were seated at a communal table with 16 guests. The first course consisted of 5 small glass containers filled with black tuffle pudding, crab, an herb mix with pickled onions, caviar, and an egg pudding. We were served brioche toast and instructed to “Have fun!” This restaruant being award 3 Michelin stars, I was pleasantly surpised at the very precise, but also relaxed attitude of the meal.

We were then escorted into the kitchen for a cocktail and bite, giving us an intimate and exposed view of the kitchen, staff and prepartions that go into every dish. Back in the dining room, the room had been transformed to have multiple tables and we were seated with our party. The menu had been revealed, but wanting to keep the element of surprise, few words were used to describe the upcoming courses. I won’t go through all the courses, but I will do my best to elaborate on Alinea’s fun and mind bending dining experience.

Trying to decipher the menu was like trying to decode a treasure map in an unknown language – near impossible – so we resigned to the anticipation and surprise of each course. The “Crunch Paper” course was a surprising twist on sea scallops. Dehydrated sheets of sea scallop were served in a bowl, a sweet corn broth was poured over it while we were provided with chopsticks to use. Served alongside was a sea scallop cannoli. “Yellow” was a sweet potato and yellow curry served in your hand. In “Cloche Bone,” my favorite element was a Wagyu beef rice crispy treat. Yes, steak on a rice crispy. I was expecting to really dislike it, but I was so pleasanly surprised at the flavors contrasting and complimenting each other, all at the same time.

The most interesting course was the combining of “Contrast,” “Sparrow-Glass,” and “Swirl.”(Pictured above) Not only were the flavors and ingredients so full of flavor and intrigue, but the ingredients were in fabulously, unique form and presentation. However, the center piece quickly became an active participant in our meal. A teapot poured into our centerpiece, which seemed to be an innocent bowl of fruit, soon began overflowing with the most fragrant smoke as we ate. Light and fresh, it added an extra essence to each bite. 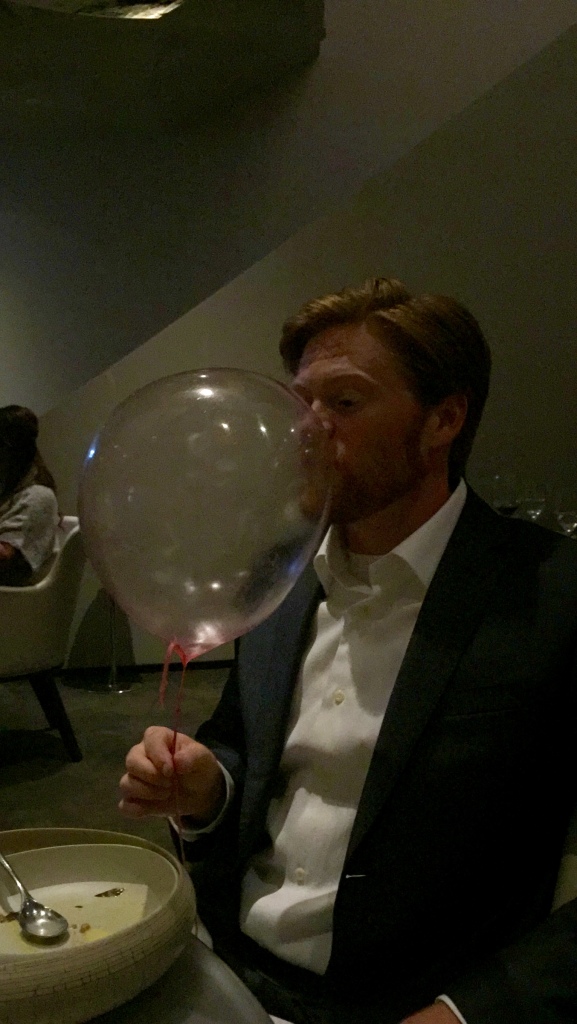 Dessert consisted of two courses. The first was an edible balloon filled with helium! A little sticky, but the treat left you with a silly, high pitched voice. However, the finale was our favorite! Removing pieces of art from the ceiling, a plexiglass “canvas” was placed on each table. Lights were dimmed and the show began… A series of chefs came by each table sprinkling, tossing and painting the ingredients all over. When the lights came on, it revealed a whole new piece of art on top of the art removed from the ceiling. As a communal dessert, we scooped and scraped up all we could from the dish!

Although Alinea has earned 3 (well deserved) Michelin stars, their prestige and precision does not overshadow or interfere with their desire for guests’ interaction, sense of wonderment, and enjoyment. Due to its popularity and high ratings, I went in expecting an uptight atmosphere and strict dining experience, but I left feeling laid back and shared several laughs with the sommelier and other staff. I know there are many with more credability who have dined at and reviewed Alinea, but it was truly an experience! We loved the sense of anticipation and excitement of the meal. We will definitely be returning to experience what else Achtaz and his team dream up and create!

Daily afternoon sink bath! 🛁💦
Thankful to be celebrating Christ’s birth this season! Our cup overflows. Charlotte’s first Christmas and first snow!! ❄️
What a difference a year makes! So thankful for this year with our sweet Charlotte! 2019 ➡️2018 Merry Christmas Eve! 🎄
Charlotte is always making our days MERRY & BRIGHT! 💗
This little babe is 7 months tomorrow! Can’t believe how fast time is flying... She is full of so much personality and is trying so hard to crawl! Excited to experience her first Christmas! 🎄
Happy Thanksgiving from the Lamberts! So thankful for our newest little turkey this year!
BLESS THIS MESS! 🧡
How has it already been 6 MONTHS with sweet Charlotte?? She has had a big month filled with lots of “firsts” ... first @bufootball game, first basketball game, first Halloween, trying out her first foods (which she LOVES), and first flower girl gig! Charlotte loves to “talk” and is always laughing, loves her people and is a pretty happy baby. Every stage with her just gets better and better! 💗 @reed_lambert
Simply the BEST weekend celebrating the newest MR & MRS!! We love you @chasenicolefreeman and @b.free.man!
The cutest little piggy you ever saw! And her favorite farmer!
Fabulous #freemanfiesta celebrating @chasengibson and @b.free.man! Can’t wait to keep celebrating at the wedding in a couple weeks! 🌮💃🏼🥂
Charlotte’s first @bayloruniversity game! What a game!! #sicembears @bufootball
beach babes 💗
How is this babe already 4 months?! Charlotte has grown so much and has the best chunky thighs we’ve ever seen! She has really found her voice and loves “talking” and giggling, always wakes up happy and she’s even rolled over just a few times!
This girl is 3 MONTHS OLD! Charlotte is growing like crazy... leg rolls for days, becoming so aware and loves responding to all her favorite people! She is smiling, laughing, still so relaxed and laid back, sleeping all night in her crib and *almost* rolling over! We are more in love with her every day 💗
The best fiesta to celebrate @katiepaschall and @pawkageorgio last weekend! Can’t wait for México!! #crashingthegeorges